What Is Live Food? 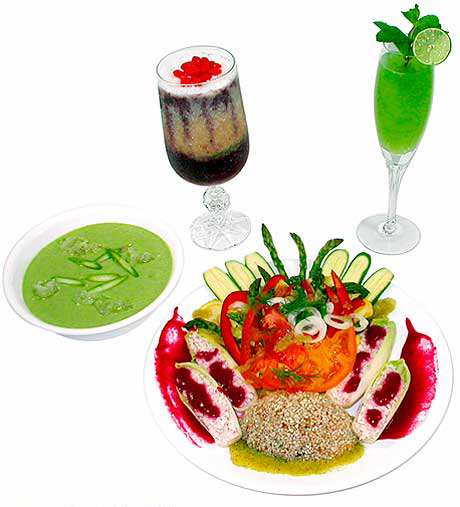 The term live food does not refer to eating critters alive, but rather raw, uncooked, and sprouted vegetarian foods, not heated above approximately 115 degrees Fahrenheit, consumed for optimizing health, reversing disease, as well as delicious taste. The terms "live" or "living" food are used to differentiate the inclusion of sprouted and growing plants from simply raw harvested plants such as leaves, fruits, and vegetables. Kristine Nolfi, MD is credited with coining the term "living food" in the 1940s to describe the diet when writing about healing herself of breast cancer with raw vegan foods. Live, raw, living foods are not cooked, microwaved, or irradiated, and ideally are organic, that is, grown without the use of chemical pesticides, herbicides, fertilizers, or genetic modification. Heating above 115 degrees destroys the beneficial enzymes, micronutrients, chemistry, and life force energies of plants crucial to human health.

Human beings and the animals they have domesticated are the only living organisms on this planet from bacteria to whales that normally eat cooked food. Cooked food creates acidity and toxicity in the body, a fundamental key to cellular degeneration. Living plant material is the ultimate nutrient delivery system for the body because it contains much more than just chemicals; it contains complex living energies that plants absorb from the sun, moon, Earth, cosmic radiation, sounds of nature, lightning, animals, and the highly homeopathic water found in nature. While there is much talk about why raw plant material is rejuvenative to the body and mind, science is showing that uncooked plants contain enzymes, phytonutrients, structured water, monatomic or micro-clustered elements and minerals, other nutrients, and energies that are perfectly designed to operate within our human physiology and optimize its functions. The human body works optimally when its overall pH and blood pH are slightly alkaline. All cooked food is degenerative and most is acidifying to the body, only raw plant material is alkalizing and regenerative (although a few raw edible plants are acidifying). Plants and animals have a synergistic, symbiotic relationship. Plants are energy to matter converters; animals including humans, are matter to energy converters. Plants take water, air, nutrients from the soil, and convert sunlight into their physical matter. If you plant a tiny acorn, it grows into a giant tree, yet does not leave a giant hole in the soil where it has sucked up nutrients. Instead, the tree uses minerals, water, air, and sunlight to create its mass. Live food plant material contains exactly what our bodies need, and when we eat it we are consuming solidified solar energy. But all of this is academic; in practice, a live vegan diet and balanced humane lifestyle work to regain and maintain health where other approaches fail. Try it yourself and find out!

A Short History of Live Food

Although often presented in the media as a new fad diet, the concept of eating uncooked food is not new, logically predating the discovery of cooking by fire. Humans are the only creatures on this planet that cook their food, and consequently, we have far more disease than wild animals. The live food diet and lifestyle date back in the historical record to at least the time of the Essenes over 2000 years ago, with detailed descriptions in the Dead Sea Scrolls for healing and optimizing health (see The Essene Gospels of Peace and related works by Edmond Bordeaux Szekely). The ancient Greek biographer Diogenes Laertius noted that circa 500 BC, philosopher and mathematician Pythagoras forbade his followers to eat meat, and espoused a raw vegetarian diet to "derive health of body and acuteness of intellect." Ancient Greek physician Hippocrates, father of medicine whose name and principles are the foundation for modern medicine's Hippocratic Oath, used a live vegan diet for healing circa 400 BC. Socrates, Plato, and Aristotle also promoted vegan diets. For thousands of years the Chinese and other Asians have practiced the balance of eating "hot" and "cold" or "ying" and "yang" foods, which it is now understood, are foods that acidify or alkalize the body. As science is discovering, pH balance is a basic key to health.

More recently in the United States, live food has had many proponents. Sylvester Graham, creator of graham flour and namesake of the graham cracker, was a staunch advocate of a raw vegan diet as early as the 1820's. He developed a large following and was vehemently opposed by the doctors, butchers, bakers, tobacconists, brewers, distillers, and saloon keepers of the day, since his widely popular teachings threatened their livelihoods. His followers, dubbed Grahamites, wrote books and established boarding houses promoting the Graham system, and established what is claimed to be the world's first health food store. About the same time, German raw foodists fleeing industrialized Germany in favor of Southern California's more utopian environment added to the mix. Hermann Sexauer, a sporadic raw foodist, in 1934 founded Sexauers in Santa Barbara, one of America's first health food stores since the Grahamites. (Benedict Lust (pron. "Loost), the father of American naturopathy, is also credited with opening the first American health food store since Graham in the early 1900s.) Adding to the Southern California influence, John and Vera Richter founded the first American raw food restaurant in 1917, the Eutropheon, Greek for "good nutrition," in Los Angeles. John held weekly lectures on raw food at the restaurant which spawned a pioneering book on the subject, Nature the Healer (1936). Vera wrote Cook-Less Book (1925), one of the first American raw recipe books. The Richter's influenced dozens of California's health and raw food pioneers, among them silent film star Gloria Swanson, and natural health advocate Paul Bragg. Bragg's products are now commonly found in health food stores around the world. Numerous other raw foodists emerged in the past 200 years, notable among them: Clara Barton, founder of the Red Cross, Herbert Shelton and TC Fry, champions of "natural hygiene" (continual internal cleansing or detoxification of the body using a specific protocol of raw vegetarian food), Dr. Bernard Jensen, nutritionist and father of modern American iridology (determination of the body's strengths and weaknesses by examination of the irises).

One European emigré whose name is well known in today's natural health circles is Ann Wigmore. Born in Lithuania in 1909, Wigmore cured herself of cancer in the 1950s using wheat grass juice. In 1963 she and Viktoras Kulvinskas opened the Hippocrates Health Institute in Boston, pioneering healing with wheatgrass juice and ultimately founding a movement that has been emulated worldwide. Hippocrates has since moved to West Palm Beach, Florida. Today there are many other successful live food health centers around the world, including Gabriel Cousens' Tree of Life Rejuvenation Center in Patagonia, Arizona, Brenda Cobb's Living Foods Institute in Atlanta, Georgia, Optimum Health Institute in California and Texas, Robert Morse's Gods Herbs in Port Charlotte, Florida, Creative Health Institute in Union City, Michgan, and Hallelujah Acres in New Bern, North Carolina, to name a few.